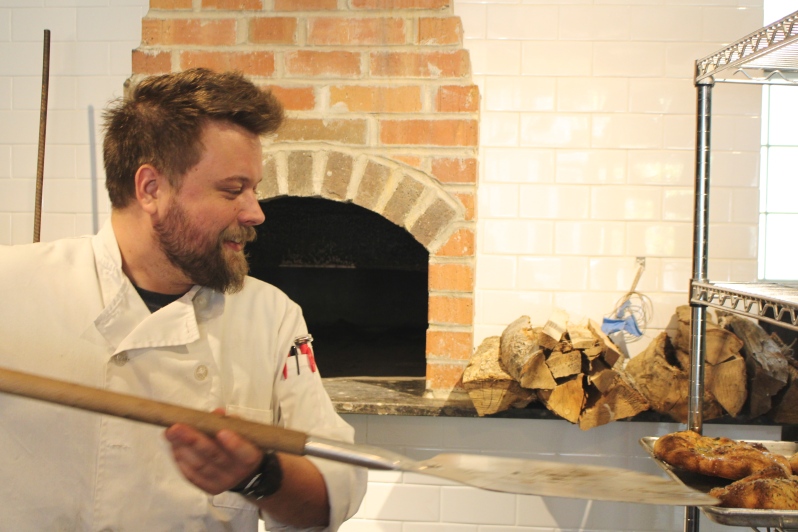 You could say it started with Alex Carlson’s 1964 Harmony Rocket h59. Or you could say the plans began over fifteen years ago when Carlson purchased a copy of “Ovencrafters” by blacksmith Alan Scott and started madly highlighting every passage as he pontificated and planned his future wood fired oven. Wherever it started, Red Guitar Bread at 3215 Cherokee is the evolution of tremendous thought, skill and painstaking planning.

Carlson sees bread as part of the larger scope of manmade achievements.  “There is nothing more elemental than baking bread. It’s a seven thousand year old process and we’re still figuring it out.  I can have a baguette that comes out of the oven absolutely perfect- the perfect specimen baguette.  And then the one right next to it looks like I slashed it while drunk and I think it looks hilarious and crazy but there it is, right next to the perfect baguette. Bread has it’s own life.  You think on paper it’s all logical and seems completely controllable but the truth is once you add that water to the flour there are a million elements that change the outcome of the bread.  For me, it’s all brain chemicals. I get this deep, deep satisfaction that I get from nothing else and it comes from baking a beautiful loaf of bread.”

Carlson bakes his breads for sale at the Schlafly Farmers’ Market on Wednesdays, 4 – 7 pm and again at the Webster Groves Farmers’ Market 3 – 6:30pm on Thursdays.  Educating the public has been a large part of Red Guitar’s goals and the one-on-one interaction at the market facilitates that relationship.  “Every once in a while I still get a kid who comes to my booth and looks at my bread and has no idea what it is.  They don’t recognize it as bread.” 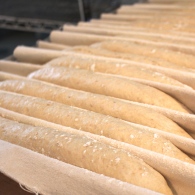 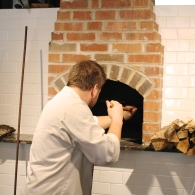 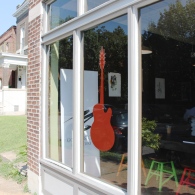 The logo for Red Guitar Bread evolved very organically.  “I spoke with friends and family and bandmates. At the time things were going really well for the band cohesively and musically.”  Part of this was the introduction of Carlson’s new red Harmony Rocket h59 which he bought at the same time he started baking bread. “My friend Kirsten O’Loughlin who has a letterpress company, Sensura Studios, said she had come up with a few ideas on the logo.”  The result is a strikingly simple visual – a red guitar with a wheat spike in place of the guitar head.  A good minimalist echo for a baker who only works with four ingredients.

Carlson utilizes a method of mixing his final dough which he uses for his miche from baker Peter Reinhardt’s book “Whole Grain Breads.” The process allows Carlson to incorporate an amazingly high portion of whole wheat into his final dough without it being heavy or adversely affecting the crumb.  Unlike many breads with a large portion of whole wheat, Carlson’s bread comes out with a delicate but chewy texture and an excellent, hearty crust absolutely profound in depth of flavor. 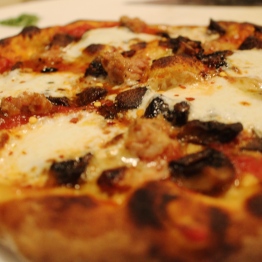 Recently, Carlson has begun firing wood fired pizzas on Friday and Saturday evenings.  Culling many of his ingredients from the farmers’ markets he sells at, they are crisp, flavorful and with just enough goo.   The future for Red Guitar Bread is wide open with possibility.  Soon, Carlson expects to add a few small pieces of equipment such as circulators and induction burners which will allow him to drastically increase his menu offerings and, with time and the addition of staff, he’ll be able to seat thirty to forty patrons in his space.  Red Guitar Bread is a study is precision, patience and possibility.